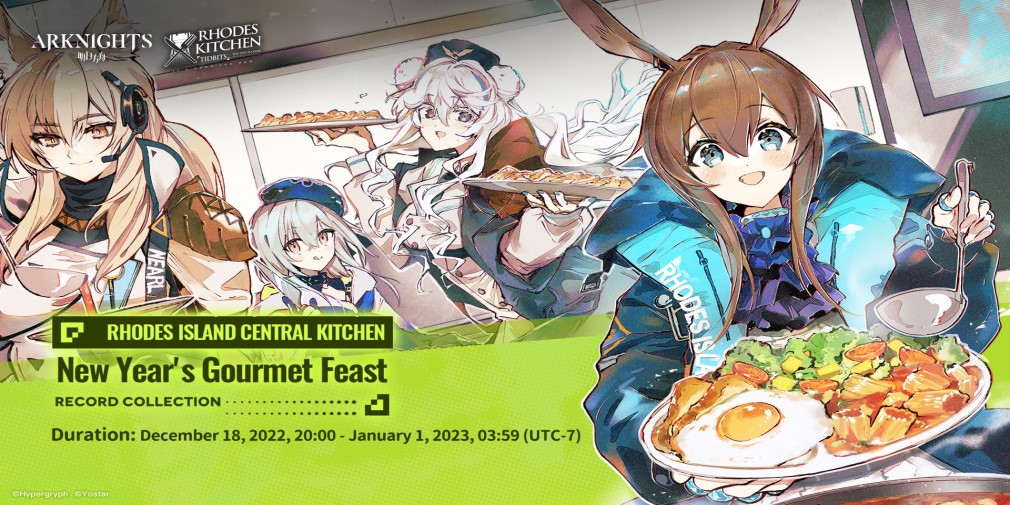 Yostar just announced the launch a new manga series for its mobile strategic RPG Arknights. It is titled Rhodes Kitchen – Tidbits and is available on the official website. To celebrate the launch of these comics, an in-game event called Rhodes Island Central Kitchen – New Year’s Gourmet Feast Collection has gone live, allowing players to win a bunch of goodies through cooking competitions.

This event will be available on Arknights through the new year. It sees the Central Kitchen place going all hands on deck as a New Year’s Feast needs to be made. Many dishes will need to be prepared, including a five course meal for the hungry Rhodes Island Operators. All of them have different taste buds so it’s going to involve some varied catering.

Players will have the choice of picking one of the five courses – appetizer, soup, main course, dessert, and drink, and then create a dish that is either based on realism or idealism. The former requires that you actually create a dish using real-life ingredients. The latter only requires that you draw. This can then be shared on social media.

The judges will choose one item from each category out of all the submissions. These ten chefs will receive the title of New Year’s Culinarian and loads of rewards like a Food-Themed Plushie Set, Emergency Sanity Concentrates, 150000 LMD, and three Headhunting Permits. The winners’ dishes will also be a part of future chapters of the manga.

That’s not all, though. Other 20 posts will also get 600 Orundum. Additional Emergency Sanity Boosters or LMD will be given to those who reach certain milestones. Follow Arknights Twitter  Facebook Post photos of your delicious dishes.