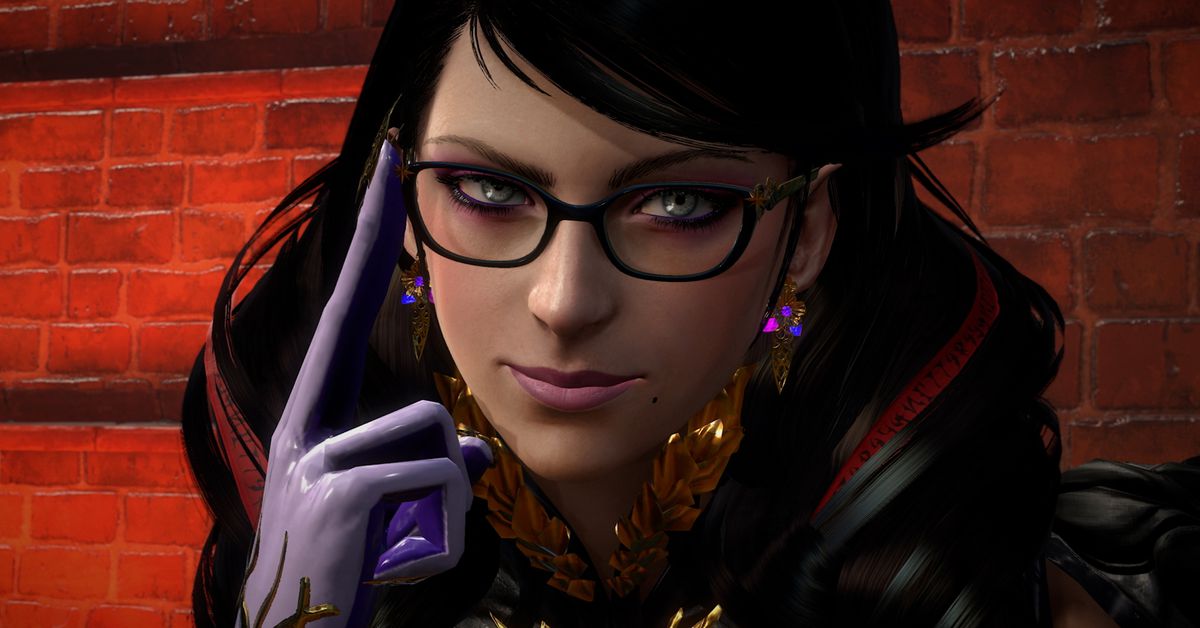 It’s hard to review a video game where you hated the ending, because of course, you can’t cover that in the review. It’s also hard to review a video game when it’s the third entry in a series of which you’re a super fan, to the point that it feels almost like a personal insult when the ending doesn’t line up with where you wanted the series to go. This is exactly what I find myself in when reviewing video games. Bayonetta 3.

PlatinumGames’ newest entry in the Bayonetta story opens with a monologue, but it’s not from Bayonetta. Instead, the first voice we hear is a brand-new character named Viola; she’s a teenage, punk rock witch in training who serves as the secondary protagonist. This story may appear to be about women, since you only play as Bayonetta, Viola, and (briefly) Jeanne, but this opening monologue is all about Viola’s father — an important piece of foreshadowing, because the patriarchy ends up playing a significant role this time around.

When Viola was a kid, her dad told her about the multiverse, leaving her with this haunting thought: “I’d always believed there was only one truth. But — what if some other version of me, on a distant world, was searching for all possibilities? And what if, when all the possibilities were overlaid, the path that stood out the clearest was the real truth?”

At this point, if you’re brand new to all things Bayonetta, you might be worried that Viola’s monologue is referring to the prior two games, which have deeply confusing lore. Guess what? Guess what? None if that lore is relevant to Bayonetta 3. That’s because this game has entirely New confusing lore.

Viola’s opening monologue is interrupted by a scene that shows Bayonetta’s shocking death. Viola screams in horror, then uses a magical necklace to transport herself to another corner of the multiverse — another time and place, where our heroine Bayonetta and her pals are still alive, still kicking butt, and still capable of saving the day. Or so Viola hopes, since she wants nothing more than to prevent Bayonetta’s demise.

Like Viola at the game’s outset, I found myself haunted by the implications of the multiverse — the idea that, with all these different versions of Bayonetta overlaid on top of each other, the truth about her would finally become clear. The game’s end brought out the ugly truth. It was clear that the fantasy of Bayonetta was not meant for me. Instead, Bayonetta’s true destiny is not a female power fantasy at all.

Since the review embargo prevents me from going into detail, I’ll instead describe what I loved about Bayonetta in the first two games, in hopes that a clever reader will understand what may or may not happen in Bayonetta 3. In the first two games, Bayonetta has no romantic arc or relationship, and since she’s presented as a dominatrix, the extent of her sexual expression is oriented around self-pleasure. I always liked the idea of Bayonetta as eternally single, although my runner-up choice for her one true love would be Jeanne — plus, official game art and social media posts from the games’ creators have suggested that Bayonetta and Jeanne are in a queer relationship. In any case, the Bayonetta I know and love doesn’t tie herself down to a man, and she certainly wouldn’t need to be rescued by one.

Unfortunately, Bayonetta 3 This ensures that one of the few female characters featured in mainstream games who has to own her sexuality must pay some tax. Meanwhile, Viola — who’s dressed in a far less feminine outfit and who doesn’t get ogled by the game’s camera during cutscenes — serves as a more PR-friendly Strong Female Character to slap on a video game box. Bayonetta might have been too complex, sexually charged, and brazen. She had to be cut down.

Luckily, I found plenty to enjoy before the game’s closing cinematic twisted a knife in my heart. Jennifer Hale’s take on the character, controversial as it may be, struck my ears as a perfectly serviceable echo of Hellena Taylor’s initial two performances. The game’s strongest element is the lightning precision of its combo-heavy combat, bolstered by power-ups and healing lollipops from the in-game shop. Bayonetta 3 Bayonetta now has a new way to combat, and it makes it much easier and more diverse. She can summon massive demonic entities that she can use to attack her enemies. (Don’t miss the skill trees for these demons and the themed weapons that come with each one; the leveling-up process is buried in submenus.)

Bayonetta 3 also occasionally puts you in the shoes of Viola, who wields a katana and shares Bayonetta’s Witch Time slo-mo ability, although Viola triggers it through parries rather than dodges. Viola was a much more comfortable and powerful role than Bayonetta, but it seemed right for a witch in training who lacks both the confidence and power of her foremothers Jeanne and Bayonetta. I loved her lighthearted comedy and tendency to lightly slap her face when she is trying to concentrate.

Then there’s Jeanne, who’s playable in a series of 2D stealth missions that feel unlike anything else in the game — almost like Mark of the Ninja Or Invisible, Inc., albeit much simpler. I prefer to pummel my enemies instead of sneaking up on them (Jeanne does have that ability, but it is still surprisingly fun to do some patient sneaking. These missions provided a nice break from the combat-heavy nature the rest of my game.

Meeting versions of Bayonetta from other parts of the multiverse didn’t make much sense, but it did prove to be entertaining as hell. They didn’t come across as interdimensional beings so much as just Bayonettas from around the world; there was an ancient Egyptian Bayonetta, who’s dressed like a witchy version of Cleopatra, and then there was an 1800s French cabaret Bayonetta, who’s dressed for a performance at the Moulin Rouge. Who knows why each of these Bayonettas (as Jeannes and Enzos, etc.) hail from these particular places and time periods? And who cares? It was just plain fun to meet them all and see the goofy variations on their personalities and power sets, even though I could have done without hearing all of the voice actors’ abysmal French accents.

Between Viola, Bayonetta and Jeanne Bayonetta 3 is a well-rounded beatdown with a diverse range of combat styles and plenty of ways to mix up how you play, ensuring that you’ll never get bored. Similar to Bayonetta And Bayonetta 2The game tracks player performance at each level. It encourages you replay every mission until your goal of achieving the coveted Platinum ranking.

Hence, I was astonished that it took me so long to uninstall the game after I had finished it.

Well, reader, as I’ve said before, I can’t reveal all the details of why. All I can do is tell you how much Bayonetta has meant to me over the years, particularly when I first started out as a games critic back in 2007 — one of the few women in the field at the time. I was a teenager when I saw the first ads for Bayonetta back then, I assumed she’d be just another sexpot designed with straight male gamers in mind — like Lara Croft, or Samus Aran in a bikini that gets smaller and smaller depending on the player’s efficiency and skill. These were characters that I admired and related to. despite The fact that their bodies were presented to them as sexualized reward. And in the initial Bayonetta, too, I noticed the way the camera panned lovingly over the heroine’s breasts and butt during cutscenes, assuming you were there purely to lust after her rather than to imagine yourself wearing those high-heeled gun stilettos yourself.

Bayonetta fulfilled the fantasy of players who wanted a strong, unapologetically feminin protagonist

I also loved that Bayonetta made a deal for her witch powers with the literal Devil, but that it didn’t seem like the end of her road. That’s because even though Bayonetta’s mom was also a witch, her dad was a Lumen Sage — meaning he works for the heavenly powers that be, not the demons down below (Bayonetta’s parents had a Romeo and Juliet situation going on). Since witches are a symbol of feminine power, Bayonetta’s joy in the face of her future damnation always felt like a triumph — a rebellion.

And yet I understood, all that time, why some of my friends didn’t vibe with Bayonetta — yes, even my queer and female friends. There was just something… off. Something deep down that suggested that this heroine wasn’t meant for us. That’s because it turns out that Bayonetta was made with Luka in mind.

You might be wondering who the fuck Luka is. Well, I can’t blame you, because he isn’t exactly an important part of Bayonetta And Bayonetta 2. He’s a side character best described as a simp, although that slang term didn’t get popular until years after Bayonetta 2’s release. Better yet, I’ll quote this description of Luka said by Loki in Bayonetta 2: “Hey, you’re the pervert staring at Bayonetta’s tits all the time. You really need to learn how to talk to a lady!”

Luka longs for Bayonetta all the while, and is constantly in danger of falling over himself trying to keep up with her adventures. He’s no Lumen Sage Or Umbra Witch; he’s just a regular human being, without any superpowers or mystical destiny. My most charitable read on Luka is that he’s an audience stand-in — but, of course, that isn’t particularly charitable to the audience, since this characterization would paint them all as pathetic man-children who slobber after Bayonetta, incapable of matching her level of coolness and sexiness.

I don’t see myself as anything like Luka. I see myself as… well, Bayonetta. It’s a fantasy, OK? Let me have this one! Except, of course, Bayonetta 3 doesn’t let me have this one. It’s not so Bayonetta And Bayonetta 2 Let me have it anyway. In those games, Bayonetta was always the coolest person in the room, and mere mortals like Luka should’ve counted themselves lucky to breathe the same air. Yet inexplicably, in Bayonetta 3Luka achieves unearned power and prominence. Why he’s suddenly such a big deal, when previously he was little more than comic relief, amounts to a big heteronormative shrug.

I don’t know what to tell longtime Bayonetta fans about this game, let alone the newcomers hoping to come aboard with this installment. If all you care about is button-ramming combat that’s similar to Devil May Cry, you’ll have a ball. But if you ever wanted to believe that there was something deeper to Bayonetta’s story — some grander statement about femininity and sexuality and power dynamics — you’ll find the truth to be quite a disappointment. Viola did inform me at the beginning that it would reveal this fundamental truth. I only wish that I could have lived in ignorance for a while longer.

Bayonetta 3 On October 28, 2008, the following information will be available: Nintendo Switch. Nintendo provided a pre-release code for the game to be reviewed on Nintendo Switch. Vox Media has an affiliate partnership. These do not impact editorial content. Vox Media can earn commissions for products bought via affiliate links. Find out more. additional information about Polygon’s ethics policy here.

A weekly roundup with the best Polygon things