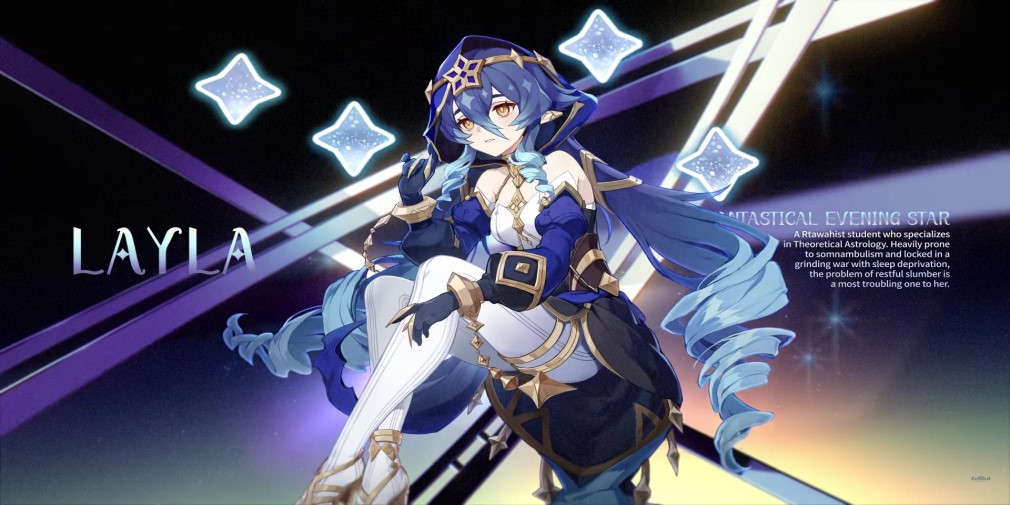 Genshin Impact’s version 3.2 – Akasha Pulses, the Kalpa Flame Rises is in full swing with the flurry of events that it includes. This update was intended to introduce two new characters, Nahida being one of them. Today we will be focusing on Layla, the second.

Layla is Genshin Impact’s latest playable character, a Cryo user that employs a sharp sword to deal damage. She recently enrolled at Akademiya where she is studying Theoretical Astrology with the Rtawahist Darshan and has decided to study Illuminationism.

Illuminationism blends astronomy with astrology to help researchers discover the secrets of our universe. That sounds like an extremely difficult thing to study as it’s led to Layla dealing with sleep deprivation and somnambulism, or sleepwalking. She is constantly in conflict with herself about slumbering and more than just fighting enemies.

Her antics have earned her many nicknames, including the Sleepwalking Eccentric and the Human Calculator, as well as the Heaven-Sent Thesis. Layla, despite these nicknames, is a formidable fighter who can become even more deadly in her sleep.

She uses her sword to slash through unsuspecting foes in three strikes. The third strike can be charged to deliver two quick hits. Her talents are unmatched. Her diverse skills allow her to deal a lot of AoE Cryo Damage on enemies. These moves allow her to gain Night Stars that can be used as homing missiles to strike down opponents.

Layla’s Elemental Skill allows her to create a shield protecting the entire party while still damaging enemies, while her Elemental Burst releases a Celestial Dreamsphere that consistently bashes foes within a designated region.

See also  Pokemon Go Fest 2022 was a great success. It contributed over $300 million to local economies.

You definitely do not want to be on Layla’s sleepy side. Get the Fantastical Evening Star Layla now by downloading Genshin Impact for free.

You can also check out this list with Genshin Impact codes that you can redeem!