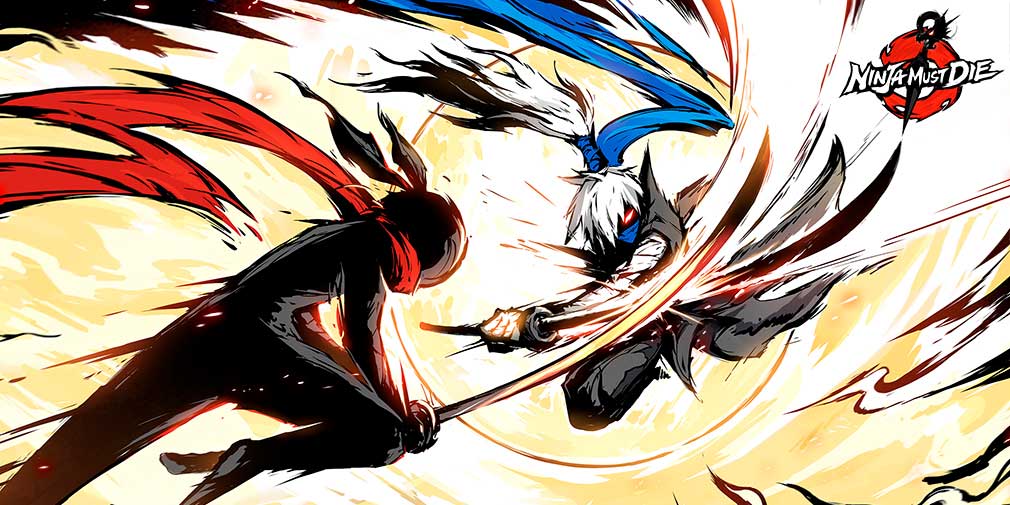 Ninja Must Die is Pandada Games’ ninja themed action platformer that tasks players with jumping, flipping, and slashing through beautifully designed, auto running levels to uncover a sinister plot by the samurai to eliminate all of the ninjas.

Along the way you’ll be introduced to several playable ninjas, each of whom possess unique talents to take advantage of whilst using the slick control system to dodge traps and vanquish your foes.

If you’re just starting out and want to take your ninja from Junior to Elite as fast as possible, here are a few tips to help you get there.

Ninja Must Die features four playable ninjas, two of which (Kuro and Riki) are obtainable via the game’s Story Mode.

Kuro, an aspiring ninja from Ninja Village, is the main protagonist in the game and the very first ninja you’ll be introduced to. As a rookie ninja, you’ll be guided through the basic gameplay and controls as well as Summons – special beasts that can be summoned at certain points in various modes – as you take Kuro through the stages to finally become the ultimate real ninja.

Riki, a young master from Bamboo Village who possesses Lightning power, is your new team member. This highly skilled panda is ready to join your team once you have cleared stage 2 of Chapter 4 in Story Mode.

Rin and Souga on the other hand can be summoned at the game’s Shrine of Fate – unlocked after completing stage 6 of chapter 2.

Players can get a taste of Souga’s power in chapter 2 where you can use his triple jump and devastating Demonic Shuriken Talent to vanquish a vicious samurai. Rin can glide in midair and rain down shards on her foes.

To progress through Ninja Must Die, you’ll need to have your ninja reach a certain level in order to advance to a new chapter.

The basic item for levelling up your ninja are Coins, which you’ll collect as you run through each stage. Each upgrade will increase your HP and ATK as well as your HP Recovery.

You can also enhance your special Talents with Elemental Stones that each ninja can use to boost their respective talents. For example, Kuro needs Fire Stones to increase his Dragon Gunfire Talent, which unleashes fireballs at his enemies. You will also need Awakening Stones to unlock additional Talent upgrades. These Stones can be very difficult to find so make sure you keep an eye out for them during stages.

There are many ways to improve your ninja skills using items and support units. With the summons at Shrine of Fate, you can assign up to two support Ninjas and one or more ninja to form a ninja group. Although they won’t appear directly in combat, support ninjas will increase ATK and other special buffs. These same buffs can be obtained by equipping Relics like the Daruma Panda that provides a +50 rise in HP and an increase of score of +20%.

Relics can be attached to any ninja up to four times. They belong to one of six ranks, D, C, A, B, A. S, SS. Relics from the same set can provide additional bonuses, so make sure you pay close attention to their type to maximize their effectiveness.

How to get the most out your weapons

Weapons can be anything from swords to bamboo flutes. In Ninja Must Die, the effectiveness of each weapon is determined both by its Element, Fire, Lightning, Water, Wind, and its Grade (Common Rare, Epic and Legendary).


The first instinct you might have when you receive a high-grade weapon is to upgrade it as soon as possible (using materials such as Iron Hammer, Spanner, etc.). However, this may not be the best idea. Until players achieve Awakening for their ninja (which allows you to equip a second weapon), you’ll only be able to equip one weapon, and different modes will favour a particular weapon type.

For example, the Lightning Chaser Bow is a perfect choice for boss battle stages as it deals a lot of attack damage in quick time, but for stages where you’ll find yourself chased, or having to avoid a series of traps, a more protective weapon such as the Snow Sword, which surrounds your ninja with a shield of rotating blades, is more preferable.

Also, whenever possible, make sure to match weapons according to your ninja’s Elemental Type, such as the Fire Bansho with Kuro for instance, in order to receive an additional ATK bonus.

Lastly, if you’ve collected a lot of weapons that you have no use for, you can exchange them for Gold Bone with Mr. Shiba. A random Legendary weapon will be available for 800 Gold Bone every month so it’s a resource that’s definitely worth having.

If you were wondering why a seemingly single player game is online, it’s because there’s actually a multitude of multiplayer modes to unlock, including 3v3 Match Modes, Ranking Modes, a Bounty Mode where you can team up to take down bosses.

Unlocked upon reaching chapter 3 of the Story Mode, the Bounty Mode provides a useful opportunity to score rare items as rewards whilst also finding potential friends while you’re at it. By joining a Clan or adding friends in Ninja Must Die, you’ll be able to invite players whom you trust to be an asset rather than a hindrance when going after bounties, as well as easily invite worthy adversaries to challenge you in 3v3 Mode where your strategy skills will be tested to their fullest.

For more Ninja Must Die content, be sure to check out the game’s hub page, as well keep up to date with all of its latest developments by following the game’s official Twitter and Facebook channels.

Ninja Must Die is a free to play game that’s currently available to download from the iOS App Store and Google Play Store.